The Moat of Kill

Situated south east of the village of Kill, beside a modern housing estate, lies the, 'Moat' of Kill, which consists of a tree covered mound, enclosed by a ditch with a slight counterscarp bank, and a bailey on the north-western side. The Kill river flows through the ditch on the south west side. The motte itself is a round conical mound 12 metres high with extensive views on all sides except the east, where it is overlooked by the historic Kill Hill, where recent excavations have uncovered evidence of Neolithic and Bronze Age activity.
The motte was probably erected in the late 12th or early 13th century by the de Hereford family, who were granted this land after the Norman invasion. There are few records of its history but, at the Dissolution in the 1540's, it is described as "a small mountain surrounded by a dry ditch on which the capital of the manor was situated and where the Court Baron is still held".
Local tradition also attributes it with being the burial place of the Kings (or Queens) of Leinster. This may point to it being a much earlier burial mound, re-used as a
Norman fortified site, of which there is at least one other example in the locality.
Return to Hidden Gems 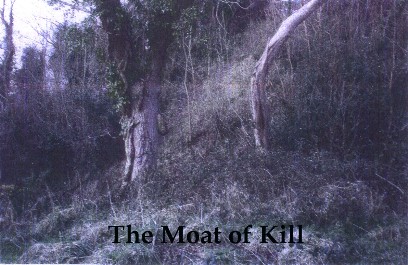